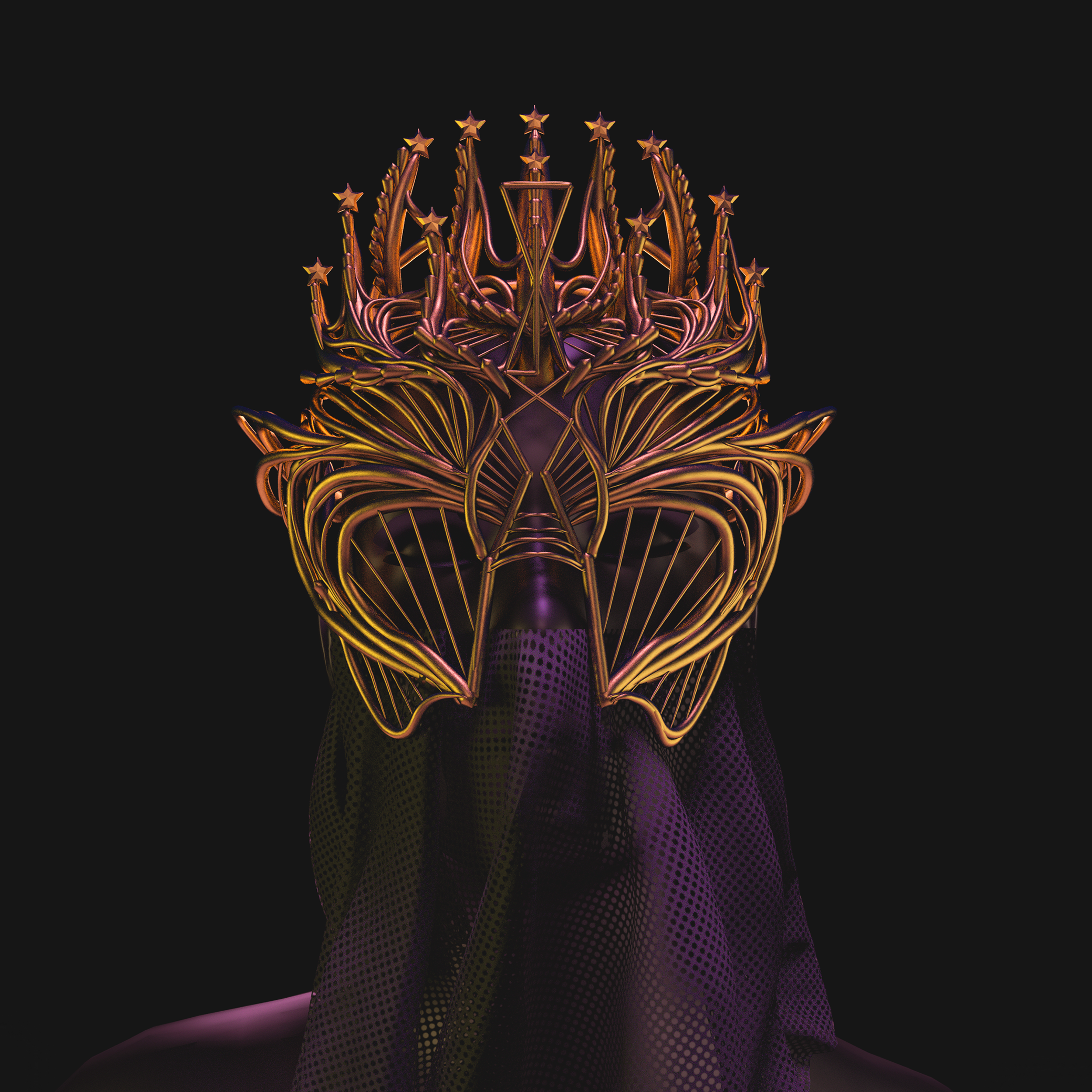 The Two of Swords shows a blindfolded woman, 2 crossed swords representing protection from painful feelings, surrounded by turbulent emotions. "Tension & anxiety" is what connects this to the song Bitches Want Pictures—written about society's obsession with self-image, unhealthy addiction to social media and extreme vanity. Two of Swords is the single artwork for BRUX’s 2019 release Bitches Want Pictures.

Bitches want pictures, the illusion if you’re rich or not. It don’t matter where you are, you gotta get that shot. On your phone girl 24/7, you lap it up, not laugh it off.

The empress holds a lot of power. She stands for sovereignty, creative expression and birth of new beginnings—her crown has twelve stars representing her dominance over the year. It holds tremendous personal meaning for me: this encapsulates the energy of BRUX overall. This single was the first original BRUX release, marking the birth of a new era. “I’m Back” communicates a narrative flip on objectification of women. The empress embraces her sexuality and regains power where "shame" and "guilt" once lived. The Empress is the single artwork for BRUX’s 2018 release “I’m Back.”

I see how much you flex for me, but let’s skip the steps, it’s sex I need..all your other bad girls I put to shame…about damn time they put a face to a name...strung out for your body…you got me hooked so I’m back again.

The Ten of Cups represents contentment and abundance within relationships— however, when it shows up in a reading as reversed (the card flipped upside down), it represents seeking greater harmony and connection. “Paper Boy” communicates that yearning. The Ten of Cups is the single artwork for BRUX’s 2018 release “Paper Boy.”

All that I want is to hold something real, all that I need is to feel...

The Moon represents fears and illusions, projecting fear into our present and our future, based only on the past. “Belong” emotionally sits in that pocket of euphoric feeling that the right person has come along, alongside the simultaneous disbelief and feelings of doubt. The Moon is the single artwork for BRUX’s 2019 release Belong.

“Oh I’ve waited so long, (high above you must’ve fallen from) clear the air to my lungs…I’ll go wherever you go”

The Devil card, representing darkness within. The shadow side, the negative forces that hold us back from being our authentic self. Lyrically, there's a yearning for deeper connection with something we're already tethered to, when we're already too far in. The Devil is the single artwork for BRUX’s 2019 release Bound To You.

Show your feelings, I can't help but read into their meaning, I can't stop... I'm bound to you

Ace of Wands symbolizes willpower and creative strength, growth from within, daring with a sense of urgency. It’s the urgency and boldness that the card exudes that connects to the song. Ace of Wands is the single artwork for BRUX’s 2018 release In My Dreams.

I want you, all of you, every particle, every cell, everything, everyday, everytime, every way.

ecodao is thrilled to announce “BRUX ORIGINS,” a collaboration with one of the most talented producers, singers, artists straddling the web2/web3 multiverse—BRUX. BRUX ORIGINS is an audiovisual collection of six otherworldly masked figures that visually and sonically articulate the journey from a place of tension and doubt to a place of creative strength, sovereignty, and power—a path many of us have traversed. For the first time in the piece below, BRUX reveals her specific journey that ultimately gave rise to the project we know of as BRUX.

In collaborating with BRUX, we are pushing the bounds of what it means to hold an ecodao NFT. Each piece in the collection represents an access pass to

(1) our live event on February 19 in Denver, where BRUX will performing a DJ set premiering new work
(2) our community of patrons of the arts and the environment
(3) future BRUX works (including exclusive audio clips from our event in Denver)
(4) a badge of support for your donation to the Rainforest Foundation

Each day, we’ll release one of the ORIGINS on this page. Just follow @ecodao_ on Twitter, and we’ll leave instructions after the drop for how to enter our community, so we can welcome you to our corner of the universe.

As always, when you collect, 50% of the proceeds will go to BRUX, 25% will go to the Rainforest Foundation, which supports indigenous communities with land rights and reforestation to fight climate change, and 25% will go to ecodao to support art collection, tech and community development, and events like our event in Denver. You can read more about our vision here.

The beginning of my new era manifested itself in digital form—via 3D-animated, masked beings inspired by handpicked tarot cards of creative and spiritual significance to me.

These masks are the origins of the BRUX project—a departure from my pop and rnb roots to experimental electronic club-pop. Each mask is tethered to the first six standalone singles that I released from 2018 to 2019. They were constructed in collaboration with Radimir Koch and Micah Milner from the inside out, starting with a 3D cast of my head and torso.

The idea of anonymity is part of my larger story—deflecting my female identity to shift the focus to my music. It was also a way for me to exist somewhat “behind the scenes.” Ambiguity was how I learned to fit into a man's world—by being mistaken for male and respected—instead of being objectified as a “female producer” and treated as a novelty.

I know my experiences are not unique, and there are artists in more restrictive circumstances than me. So I feel inclined to create art that demands space and regains power for us, for me. These masks have allowed me to put my talent at the forefront and direct judgment purely towards my music, rather than my personal identity.

Each mask represents a tarot card that encapsulates the theme of each single to which it is matched. The Empress is tied to ‘I’m Back’, 10 of Cups is tied to  ‘PaperBoy’, Ace of Wands is tied to ‘In My Dreams’, The Moon is tied to ‘Belong’, The Devil is tied to ‘Bound To You’, and Two of Swords is tied to ‘Bitches Want Pictures’ (in order of release). The precise story behind each mask will be described in detail as each mask is released.

I’m inspired by the art and divination of tarot, as clairvoyance is a gift that runs in my family. This piece of work was a way for me to depict that part of my identity. I recognize that the practice of tarot originated with and belongs to the Romani* people and believe it’s important to respect and pay homage to a cultural practice that is core to their heritage. Below, we have provided additional resources about the Romani people and their tarot practice.

For this NFT series, I used each individual mask as an input to generate a unique chromatic etude. The process consisted of synthesizing sound from an artificially drawn spectrogram. After this point, the compositions were further developed by extracting the midi and using it to trigger a drum machine and softsynth piano.

The sonic results are bizarre—as if they are radio interferences from another dimension…they bring these figures to life and give them new context.

The masks that we will unlock over the next six days are a retrospective of my artistry, as BRUX. They were a new beginning for me as I embarked on this project. I hope for you—my collectors, my supporters, my peers—they mark a beginning where we are revered for our contributions above all.

If you’d like to learn more about the Romani people, their culture and their fight, please see these resources below:
<https://en.wikipedia.org/wiki/Romani_society_and_culture
](https://en.wikipedia.org/wiki/Romani_society_and_culture)<https://www.opensocietyfoundations.org/explainers/roma-and-open-society
](https://www.opensocietyfoundations.org/explainers/roma-and-open-society)https://www.romasupportgroup.org.uk/history.html